A Christian Home-Educating mum told me a story about how she had taken her little daughter to the Doctor's. In the course of the examination, the female GP asked the little girl what she wanted to be when she grew up; the little girl thought for a moment and then said, "a mother!" In that instant, two very different worlds collided.
﻿ 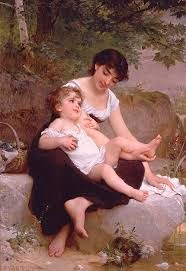 Young Christian women today, suffer immensely from the pressures of our society, to conform to an ideal that God never intended them to endure. They are sexualised by the media and the fashion industry at an early age (and many Christian writers have spoken intelligently and with justified condemnation about this) and yet there is another danger that is perhaps not as explicit as the first. They are encouraged in the pursuit of a confusingly androgynous identity; a hybrid of masculine and feminine characteristics and the idea that to be truly independent and happy, they need to emulate men.

Today, young women are encouraged to be "empowered" into acting, thinking, working, drinking (or even dressing) like men. The government is doing all they can to get mothers "back to work." They are horrified by the idea that some mothers may actually want to stay at home and bring up their children themselves. What! Bring up young children without professional help and guidance! And who would want the terrible drudgery, nay slavery of being a Housewife!
A culture that sees children, not as a blessing, but as an economic inconvenience, is at odds with the word of God.

These days, the aging spectre of feminism is still attempting to groom young women to feel dissatisfied with marriage and motherhood. What is surprising is that those attitudes have even started to make their way into the church, to the extent that some Christian women (and men) are identifying themselves today as "Christian (or Jesus) feminists," despite feminism representing the antithesis of everything the Bible teaches about the role of women; particularly married women and mothers.
﻿
﻿﻿

﻿
Here are some extraordinary, and revealing, feminist quotes:


If there was ever a time that Christian women needed to find their identity, it is now.

Proverbs 31: 10 says, "Who can find a virtuous woman? for her price is far above rubies."  A virtuous woman is truly a woman of strength, though not as the feminists define strength.
Matthew Henry comments, "the weaker vessel, made strong by wisdom and grace, and the fear of God...who has command of her own spirit...a woman of resolution, who, having espoused good principles, is firm and steady to them." This is strength indeed.

A Christian woman does not need to marry in order to have worth. There are remarkable women whom God called to serve as missionaries and to live celibate lives; women like Gladys Aylward and Amy Carmichael. They expressed their strength in inherently feminine ways; such as being effectively mothers to the children whom God had entrusted to their care and confounding violent and dangerous men, with "a meek and quiet spirit, which is in the sight of God of great price."

Also, women like Hester Ann Rogers, of whom it was said,

"Though she devoted much of her time to religious duties in public and private, yet nothing seemed to be left undone which could make her children comfortable and happy. She even prevented all their wants; and was equally, nay, if it were possible, more attentive to Mr. Roger’s children by his former wife, than to her own." (The Character and Death of Mrs Hester Ann Rogers - Reverend Thomas Coke.)
The challenge for Christian women today, particularly young Christian women, is to find themselves in the Scriptures.

One thinks of the great women of the Old Testament: Esther, Ruth, Hannah and Sarah; the self-sacrificing lives they lived. They put their people, their families and yes; even their husbands, before themselves and were commended for doing so. They gave all for God.

It is absurd for Christian women to attempt to identify with politically and socially driven, non-Christian movements, like the Suffragettes. Today's politically correct history books often gloss over the fact that the Suffragettes, at times, behaved outrageously and unlawfully. Historian and Journalist Andrew Marr reminds us, that at the height of the Suffragette's protests, "The Prime Minister, Asquith was punched, had an axe flung at him and had slates thrown at his car. Winston Churchill was attacked at Bristol railway station by a riding-crop-wielding woman who hit him on the face." (The Making of Modern Britain.) Hardly the epitome of Christ-likeness!

It takes much boldness to be a Christian woman today. Particularly in a society that sees meekness as weakness, home-keeping as slavery and "modest apparel" as just plain weird! Once again, Christians have to choose between following the world, or following the love of Christ. As Amy Carmichael once observed:
“You can give without loving, but you cannot love without giving.”

Paul Jennings.
Posted by Stockport Evangelical Church at 11:35 No comments: