It was a real blessing for me this month to ordain our brother Matthew Purves as an Elder of Stockport Evangelical Church. Matthew has worked faithfully “behind the scenes” as it were in encouraging and ministering to others and is well known for his grasp of the word, Apologetics and  Biblical Theology. 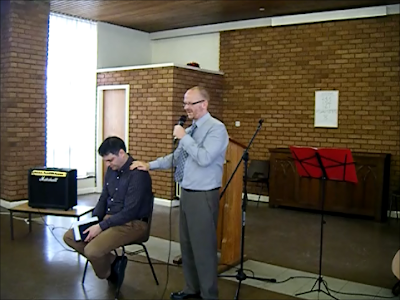 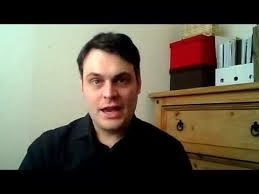 In most Protestant churches, ordination to Eldership is the rite by which churches:
In this church, whilst we are an autonomous, independent fellowship, we recognize the need for spiritual, practical and effective leadership based on Biblical principles. Elders should able to teach, refute error, be of good reputation and lead their households well. This necessarily involves gifting, spiritual maturity, an understanding of God’s word and an adherence to sound doctrine. The use of the word “Elder,” can be seen in the two following verses:


“ The elders which are among you I exhort, who am also an elder, and a witness of the sufferings of Christ...” 1 Peter 5:1 (KJV) Peter here applying the word "elder" to Apostles.


“… ordain elders in every city, as I had appointed thee:” Titus 1:5 (KJV) The Apostle Paul commanding the ordination of elders. 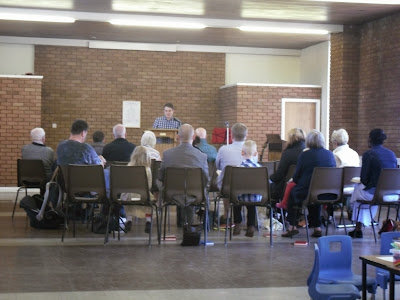 Matthew’s role as Elder will be to assist me in teaching, serving and generally caring for the spiritual needs of the congregation. The position of Elder is a position of authority within the church and is exceeded only by that of the Minister, who is in effect the senior Elder. (See Acts 12:17, Acts 15:13-19)
Paul Jennings.

Posted by Stockport Evangelical Church at 13:04 No comments: 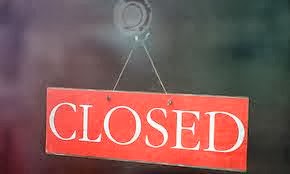 As I was handing out gospel leaflets in the town centre, a young couple came toward me. The young man, whose girlfriend was pushing a small child in a buggy, was in his late teens, or early twenties. He said he had a question. The couple recently started attending a local church, a plant by the Church of England, which had presented itself as highly contemporary, emergent in style and anything but traditional. I asked the young man what the question was. He looked up at me with a pained expression and said, “I just want to know how to get rid of my sins.” Flabbergasted, I asked if he had not enquired of other members of the congregation, not least the Minister! He replied that he had and they “didn’t seem to know.”
About a year or so later I met another young man who attended the same church. The church had grown and was very active in the community, running a local drop-in centre, parenting courses, toddler group, free-cycle, gardening, litter picking, garage sorting and car washing. The young man said it was a fantastic, growing church and I really ought to join them! So I asked if they preached the gospel. He thought for a moment and said that they hadn’t got round to that yet. When I asked why not, his reply was priceless, “we’ve been a bit busy!”


We live in an age where churches are doing their best to at least appear busy. In the summer months it’s face painting and Fun Days and as the cold weather draws in, churches are ploughing their funds into suave and cosmopolitan style cafes. Now I enjoy a Decaf Mocha and a cherry scone as much as the next man, so I saw no harm in checking them out. It was a nice enough experience and I guess church hospitality has moved on a bit from stewed tea and stale Battenberg, 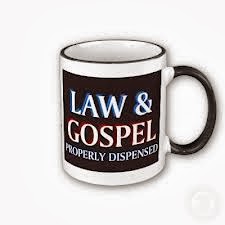 yet there was something that left an unpleasant taste in my mouth; where was the gospel?  The staff were polite, fairly friendly, efficient and yet nobody had talked to me about Jesus, no one. I scoured the walls for Scriptures: There were none. There were also no tracts on the tables, no free Bibles to peruse. The customers were eating and drinking; they were coming and going; and yet not a whiff of the gospel. What was the reason? Perhaps they also were “a bit busy? 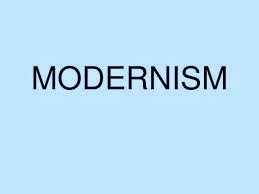 As the Watchtower (JWs) Bible and Tract Society produced their revised edition of the New World Translation of the Scriptures, many Christian cult-watchers were horrified to discover that the first eleven verses of John 8 had been completely removed. There have been cries of “who do they think they are!” and “Haven’t they read Revelation 22:19?” However, after some research, I have found that modern translations like the NIV, the NLT use a footnote comment which also suggests that these verses are in doubt! The footnotes claim that “the earliest manuscripts do not have these verses.” 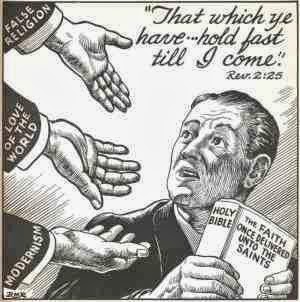 The Watchtower translators, who praise Wescott and Hort in their Bible’s preface, have long worshipped at the shrine of Higher Criticism disguised as Theological Academia. Their deliberate rejection of the King James Bible for a translation that deliberately undermines the Deity of Christ, has caused many NT scholars like to pour scorn on them; and yet…

What objection can Christians who extol the virtues of modern Bibles really have? How often we are condescendingly lectured on the value of early manuscripts and textual criticism. Haven’t the Watchtower just been more honest in their translation? Haven’t they just sided more fully with the “experts” who tell us that these verses might not be the word of God? Whilst it is a very disturbing to see verses that you and I have believed, prayed about and trusted in, suddenly erased from the Bible.  This is nothing new.  Dr Jack Moorman, author, Pastor and KJV defender said the following:

“Would it make a difference if you knew that the New Testament of your Modern Bible did not have First and Second Peter? Yet if the total number of missing words were added up this is how much shorter the modern translations are than the King James Version. Is it a cause for concern if in over 175 instances the names of Christ are missing, or if the word “hell” is not found in the Old Testament, or if key doctrinal passages have been diminished? And, the biggest shock of all! Is it possible that the most basic and blatant of all early heresies concerning the Person of Christ has been given a new lease on life in the modern Bibles? …”

“Many have gone over to the new Bibles without realising that much more is involved than the question of modern English. The entire fabric has been affected! The underlying text is substantially different. The philosophy and methodology of the translators is in marked contrast to that of the Authorised Version. The English of the new versions is assumed at first to be easier, but whether it is actually more readable, authoritative, and conducive to meditation, study, and memorization is another matter.” (The Old Heresy Revived-
Dr Jack Moorman.)

As you read your “Study” Bible notes that tell you 1 John 5:7 is “a later addition,” and “we must be cautious about building doctrine on the last twelve verses of Mark,” as they may not be inspired. Ask yourself, who is writing the notes? What does he or she believe? Are they even born again? How much do you actually know about them, and yet you are prepared to ditch twelve verses from God’s word on their say so!

As Christians we must rightly condemn the removal of passages from the Bible, yet we must be careful that we do not become hypocrites by endorsing translations that do exactly that!
Paul Jennings.

Posted by Stockport Evangelical Church at 15:23 No comments:


Posted by Stockport Evangelical Church at 15:13 No comments:

The Dangers of the Emergent Church-Ian Moulton 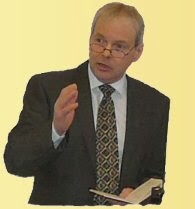 It was a first time visit to Stockport Evangelical Church for Pastor Ian Moulton last Sunday. Ian is the Pastor of Chapel House Christian Fellowship in Chorley, Lancs. and was very accommodating to myself and some other brothers in Christ when we were up in Chorley, witnessing at the British (Mormon) Pageant at the end of August. In fact it was wonderful to stand shoulder-to-shoulder with Ian and other members of the church and share the Gospel with the LDS.

This time it was not Mormons that Ian was concerning himself with, but rather the deception of what has become known as "The Emergent Church." Although his time was limited, Ian gave a very compelling introduction to what is a very complex and disturbing story as this video shows. 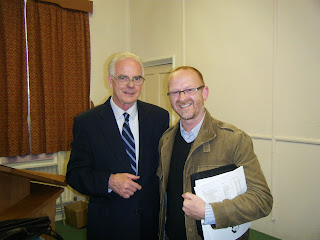 What a blessing it was to hear Dr Jack Moorman at Hellier St. Gospel Hall on October 5th. Jack is the Pastor of Bethel Baptist Church in Wimbledon and a contributor of material for The Dean Burgon Society. He is an expert in translational issues surrounding the King James Bible and has written a number of books on the subject including the classic "Forever Settled." It was a great time of fellowship and we were all impressed with the Christian warmth and hospitality shown to us by our Black Country brethren! Here are some more photos. 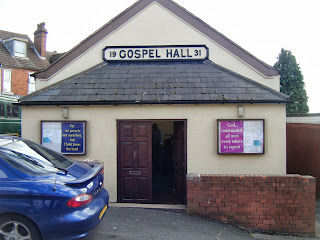 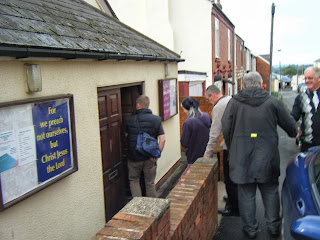 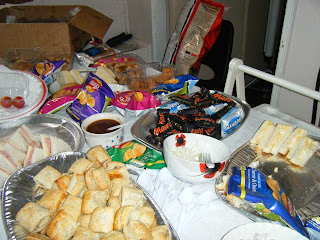 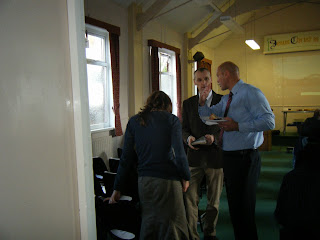 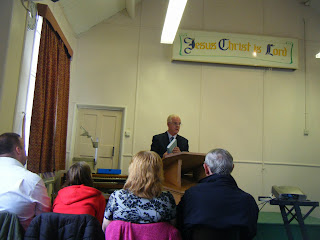 Dr Jack Moorman begins the Seminar. You can hear my question to him at 1:35:40 in the recording! http://www.youtube.com/watch?v=t2ojBlvRolU&feature=youtu.be

Posted by Stockport Evangelical Church at 15:50 No comments: